Central and South America produce far more coffee than any other growing region. Coffees from Latin America are celebrated for their great balance, medium body and clean finish. In some of these coffees, the acidity sparkles clearly above the other flavor components; in others, it provides a subtle but crisp accent. A tangy brightness and consistent quality also make them ideal foundations for blending.

Armenia – Region in Colombia, rated one of the best coffees of Colombia

Brazil Bourbon Santos – Fruity coffee, Bourbon refers to a variety of Coffee Arabica, which first appeared on the island of the same name (now Reunion Island). Santos refers to the port that the coffee shipped from — historically the main point of export for coffee.

Chanchamayo – Region in Peru, rated one of the best coffees of Peru

Costa Rica Central Valley – Region in Costa Rica on the slopes of the Poas, Barva and Irazu volcanoes with altitudes of 4,500 to 5,000 ft. Coffee is known for excellent body and finesse.

Costa Rica West Valley – Region in Costa Rica with altitudes at 3,000 to 3,500 ft. Naranjo, Palmares and San Ramon are coffee-producing communities at these altitudes, producing coffee with good aroma and balanced cup.

Guatemala Antigua – Region in Guatemala stated to be the birthplace for all coffee in Guatemala, with majestic volcanoes: Fuego, Agua and Acatenengo.

Guatemala Fraijanes – Located south of Guatemala City, this region is so high in altitude, and it is not always considered a plateau, with soil frequently nourished by Guatemala’s most active volcano, Pacaya.

Guatemala Huehuetenango – Region in Guatemala located northwest of Guatemala City. Surrounded by mountains and many rivers, which nourish its soil.

Guatemala San Marcos – Region west of Guatemala City, has the country’s two highest volcanoes, Tacana and Tajumulco, the latter being the highest in Central America at 13,800 ft.

MAMS – Blend or quality of coffee from Colombia from the following regions: Medillin, Armenia, Manazalles, Seville.

MAM – Blend or quality of coffee from Colombia from the following regions: Medillin, Armenia, Manazalles.

Mexico Chiapas - Region in Mexico where coffee is produced; best coffee is from closest to the Guatemala border.

Oaxaca, Oaxaca Pluma – State in Mexico. Believed to be one of Mexico’s best coffees. 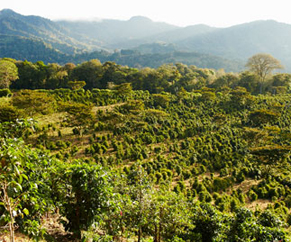 From the mountainous eastern half of the African continent and the Arabian Peninsula come some of the world's greatest coffees. Arabian coffees produce coffees that often have sweet flavors reminiscent of the aroma of a bowl of fresh fruit. This quality is balanced in some of these coffees by a somewhat tart acidity. This region exhibits a wide range of flavors, from mellow and winy to zesty and citrus.

Bugishu – from the slopes of Mt. Elgon in Uganda, rated as one of Uganda’s best. Also said to be inconsistent.

Ethiopia Sidamo – Region in Ethiopia, fairly balanced cup regarding acidity and body. Both washed and natural.

Kenya AA – Rich and sweet with a hint of black currant. “AA” refers to grade and size of the beans.

Yemen Mocha – Full bodied, medium acidity, also known as Arabian mocha, Yemen or Mocha. The name mocha comes from the ancient port, presumably from where this coffee was often shipped.

Yemen Sanani – Low acid Yemen coffee, medium body, said to be one of the best from Yemen.

A large percentage of these coffees come from Pacific Islands like Indonesia and are typically lively with herbal undertones. Asia’s coffees are popular for their full body and mellow, earthy flavors.

The coffee's country of origin is largely a matter of subjective taste. Origin is important in that the comparative bean flavor between growing regions, even within the same country, can be quite different.