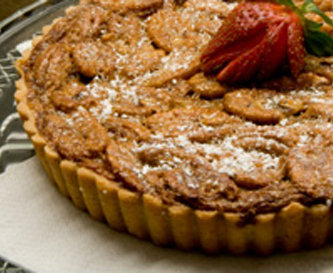 Prepare the pie crust by combining the cookie crumbs and the sugar in a medium bowl. Toss to mix well.
Add the melted butter and stir. Press the crumbs firmly into a 9-inch pie plate. Cover and chill for at least
20 minutes until firm.

In a medium mixing bowl, beat the cream cheese with an electric mixer until light and fluffy. Add the sugar and peanut butter and beat well again, scraping the bowl often.

Beat in the milk, adding it slowly to incorporate. Beat in the whipped topping and refrigerate for 30 minutes, or until chilled.

In a separate mixing bowl, use a flexible spatula to slowly blend the coffee into the ice cream. Mix until the coffee is thoroughly blended. Spread the coffee-flavored ice cream evenly over the piecrust. Spoon the cream cheese and peanut butter combination over the ice cream layer, mounding the pie in the center and smoothing it to the edges of the crust.

Cover the pie loosely with plastic wrap and freeze for 2 to 3 hours before serving.